The Relationship Between G6PD Deficiency and COVID-19 Treatment with HCQ

With the growing number of infections and deaths from the current pandemic, the interest in treatments that can improve outcomes for those impacted by COVID-19 is, of course, on the increase. One of the most discussed potential therapeutics is hydroxychloroquine (HCQ). While its efficacy in treating symptoms of COVID-19 is currently being studied, the use of this drug as both symptomatic treatment and preventive use is on the rise.

What is G6PD Deficiency?

Glucose-6-phosphate dehydrogenase (G6PD) deficiency is a genetic disorder that causes red blood cells to break down when exposed to certain triggers. The disorder occurs more often in males, but females can also be affected. The early destruction of red blood cells, called hemolysis, can lead to anemia, jaundice, dark urine, fatigue, shortness of breath, and a rapid heart rate. In severe cases, it can cause kidney failure and death. G6PD deficiency symptoms are more common in individuals of African, Asian, and Mediterranean descent. It affects one in 10 African American males in the United States.

Many people are not aware that they have G6PD deficiency until they are exposed to a trigger. Common triggers include bacterial or viral infection, treatment with certain drugs, and certain foods, such as fava beans and other legumes, menthol, and foods with soy. It is important to know whether one has G6PD deficiency so one can avoid these triggers.

Individuals should consider their family history and talk to their doctor about the possibility of G6PD deficiency if they have a blood relative with G6PD deficiency or have any of the following:

Reactions to triggers can be erratic, occurring sometimes and not others – not having a reaction does not rule out G6PD deficiency. Other factors, such as the dosage, presence of other triggers, and additional genetic or other factors that affect metabolism can play a role. Screening for G6PD deficiency is not included in newborn screening in the vast majority of states, so people are not usually diagnosed during infancy.

However, there are potential pitfalls of a G6PD enzyme assay of which to be aware. False-negative results can occur after a hemolytic event, when white blood cell counts are high (such as with an infection), or after a transfusion. If there is clinical urgency, as could be the case in determining treatment for COVID-19, an enzyme assay is preferred. 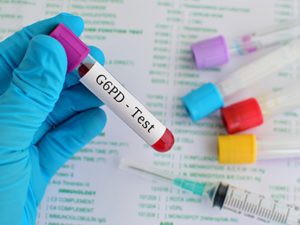 DNA testing screens for mutations in the G6PD gene can miss less common mutations, giving a false negative result. Also, results from DNA testing are not available as quickly as an enzyme assay. So for multiple reasons, enzyme testing is the preferred first-line test for diagnosis.

There is still a role for DNA testing – the current interest in treating COVID-19 with HCQ has increased interest in DNA testing for G6PD deficiency. This increased spike in G6PD testing may lead to extra scrutiny by health insurers to ensure the testing is medically indicated. Providing relevant personal and family history information with the testing request is very important and can help streamline the approval process.

The interaction of HCQ and G6PD deficiency is just one example of how our genetic differences affect our response to drugs. Information from the FDA and the Clinical Pharmacogenetics Implementation Consortium (CPIC®) is being used to help support decision making regarding personalized use of certain drugs. Pharmacogenetics, the study of how a person’s genetic differences affect their response to different drugs, is a rapidly evolving field of study that will play a more prominent role in personalized medicine in the near future.

At InformedDNA, we leverage the expertise of the most experienced full-time staff of lab-independent, board-certified genetics specialists in the U.S. to help ensure that patients, health plans, health systems and hospitals, pharmaceutical companies and healthcare providers have access to the highest quality genetics services.

Questions about G6PD deficiency symptoms? Just submit the short form below and we’ll get back with you right away. Or, give us a call at 844-846-3763.